This February, Dulwich Hamlet FC and Whitehawk FC will be joining forces for an awareness and fundraising campaign about Mental Health.

'Shout Out for Mental Health' is a campaign that has been driven by our very own Danny Mills. Having also played for Whitehawk, he has been central to this exciting and unique initiative.

Mental Health issues, particularly amongst young men, have risen sharply since the pandemic began. New research commissioned by Mind in partnership with the English Football League compares new polling data from YouGov with the same survey from 2009. The survey reveals that while some progress has been made, young men especially, feel worried or low, more regularly than ten years ago and are consequently twice as likely to feel suicidal.

Not only does this campaign work to raise awareness around mental health, it is the first time two non-league football clubs have collaborated on this scale as part of a joint campaign. We are proud to be working with another one of non league’s most progressive football clubs to show unity during the current times.
Throughout February there will be a number of fundraising and awareness events including a ‘Virtual’ match, played out on Twitter between the two sides. Like any matchday at Champion Hill, it wouldn’t be complete without our very popular 50/50 draw.

Following the similar pattern of our previous virtual 50/50 draws, we will be running another draw for the duration of the campaign.

The club’s share of the pot will be shared equally between Mind in Southwark and Lambeth and Mind in Brighton and Hove.

The winners will be announced on 21st February during the ‘Evening with Danny Mill’ event via Zoom.
For now, the message is simple – Shout Out for Mental Health.

To find out more or to get involved in this exciting initiative, please contact Rob on This email address is being protected from spambots. You need JavaScript enabled to view it. 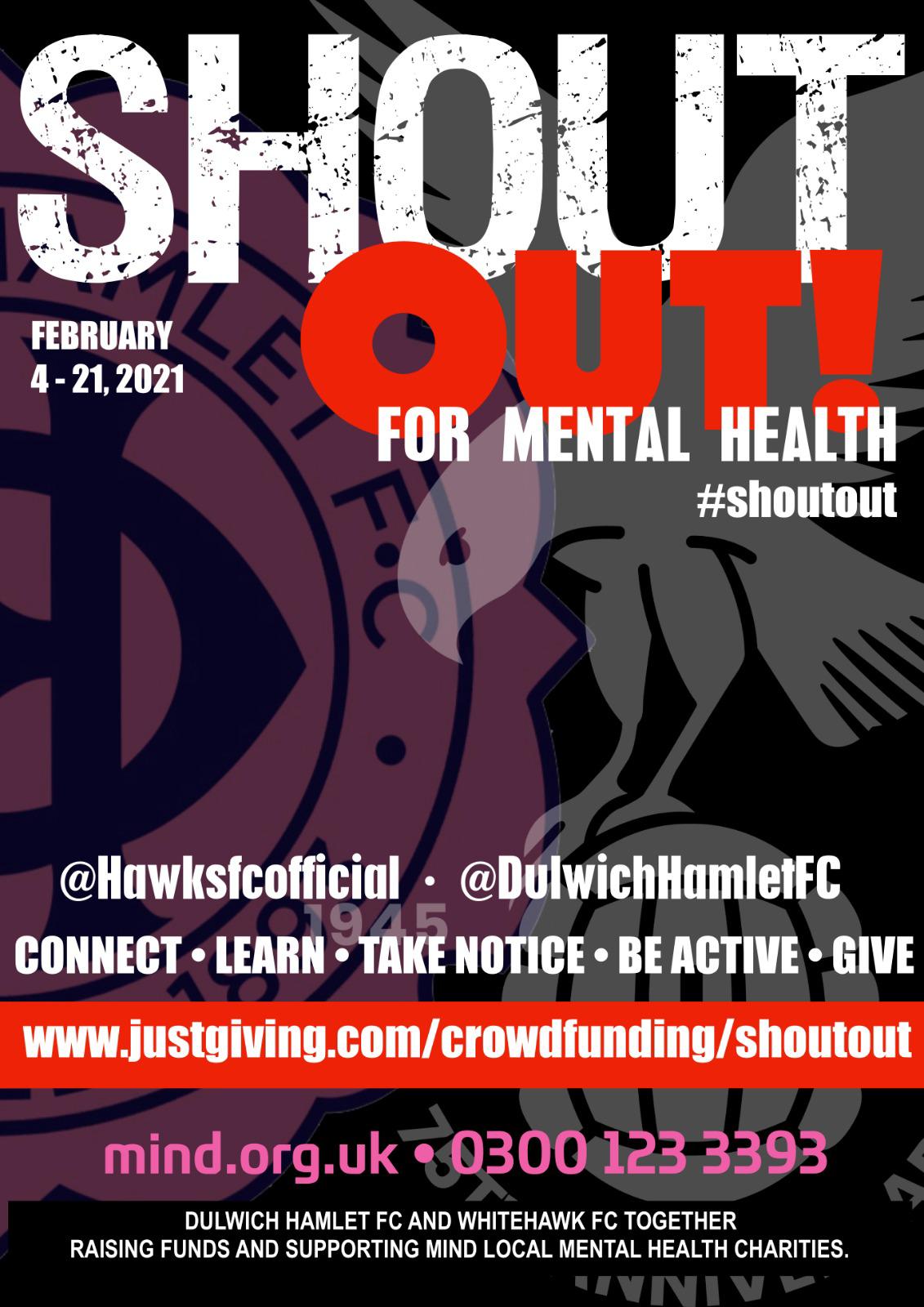 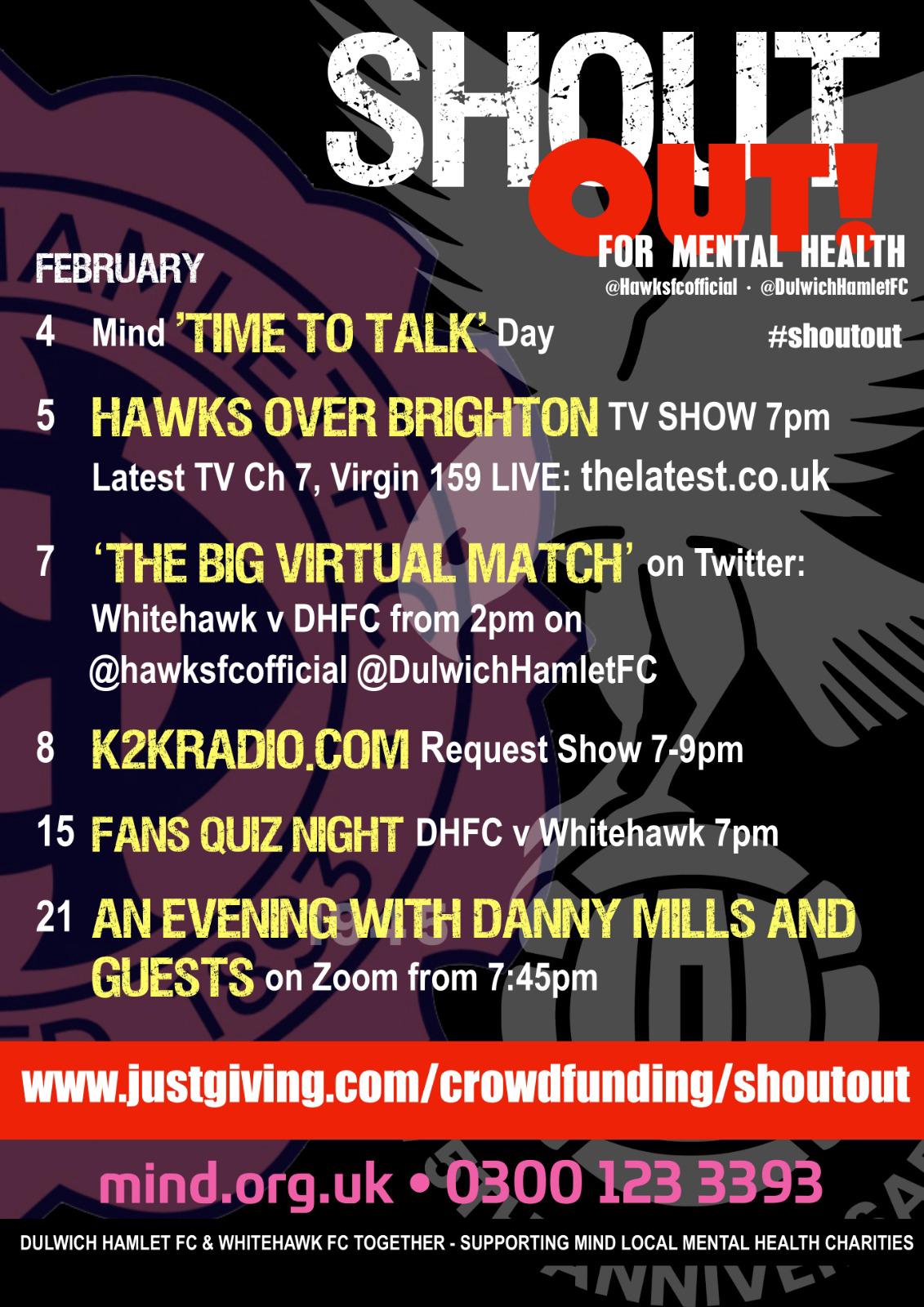 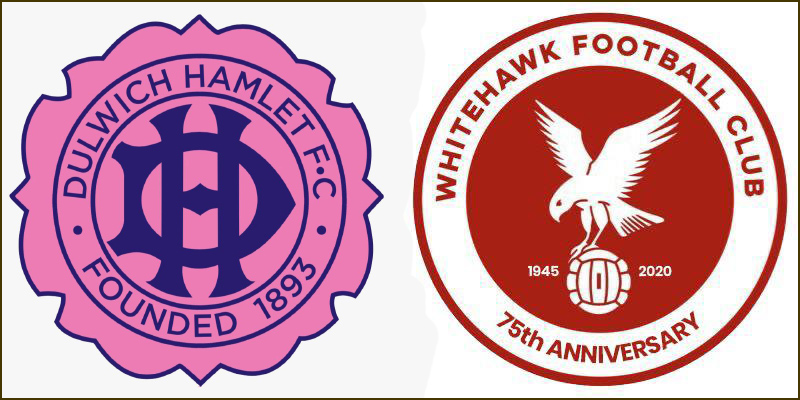 RT @DulwichHamletFC: LEYTON ORIENT: We're pleased to announce the addition of @leytonorientfc to our Pre-Season Schedule. We welcome the…
Follow Dulwich Hamlet FC Community on Twitter